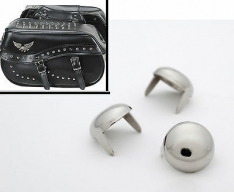 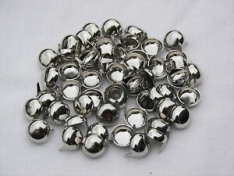 Add a little bling to your leather!

These chrome studs are the perfect compliment to your leather motorcycle seats, saddlebags, vests, clothing or anything your imagine can dream up!

They are available in two different sizes: small and large and come in a quantity of 25 per bag for endless custom possibilities. 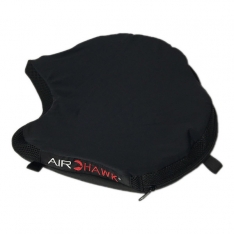 This strategically designed cushion has a cutout area that runs throughout the center of the cushion from front to back that allows for 3 points of no contact:tailbone, prostate and scrotum.

The tailbone relief area has tapered transition for increased comfort. The front cutaway allows for no contact on the scrotum as well we improved fit on the bike. Redesigned cell geometry improves airflow under the rider: NO HOT SEAT! This cushion is designed not only for maximum comfort, but also addresses issues of prostatitis, general discomfort in the sacrum and coccyx, as well as under the prostate and scrotum.